Professor James Burchfield is a Gracie Barra Certified Second Degree Black Belt Instructor in Brazilian Jiu Jitsu. He has been practicing martial arts for over 30 years. In addition to BJJ he is also a certified instructor in Muay Thai Kickboxing, Russian Sambo, Hsing-I Kung Fu, Hsing-I Liu He Chuan, Pa-Kua Chang, Tai-Chi Chuan, and 3 forms of Filipino Stick Fighting including Pekitie Tirsia, Serrada Escrima and Modern Arnis. In 1986 he opened his first school in Burton, MI called the American Fitness Center. He has operated continuously at that location since its inception, making it one of the oldest continuously running martial arts academies in the state of Michigan. In 1996 the focus of the school switched from Kung-Fu to Brazilian Jiu-Jitsu, and in 2009 he became the first and still the only certified Gracie Barra BJJ Instructor in the State of MI. Along with his in depth knowledge of Jiu-Jitsu, Professor Burchfield travels to Thailand 1-2 times per year to train at professional Muay Thai gyms to continue to develop his own technique, and provide top level kickboxing instruction. In addition to his own school, he has been recruited by General Motors numerous times to run health and wellness programs within GM facilities. In 1997 he was hired by GM Life Steps to administer a Health and Wellness Program for employees and retirees. In 2001, he was recruited by various GM plants to teach Tai Chi Chuan and Yoga in the Burton area, as well as at the UAW offices and the GM Life Step Facility. Other martial arts schools have also enlisted him as a guest instructor over the years, including the ATA Academy in Traverse City, MI as their primary Brazilian Jiu-Jitsu instructor, and Hampton Martial Arts in Blacksburg, VA to expand their knowledge of Hsing-I Kung-Fu, Hsing-I Liu He Chuan and Pa-Kua Chang.

Professor Burchfield has sought out many of the top BJJ practitioners in the world with which to train, and has brought in all but 2 of the following practitioners to his school for seminars. They include: 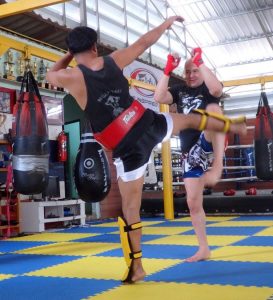 Get Fit And Stay Safe! Join Us In Burton Today!

I have been training with Prof Burchfield since 1994. I was there when he first started down his path of learning Jiu-Jitsu.  The road he traveled most people would never have the strength to go. Jim has developed the classroom structure to develop world-class practitioners himself.  If you want to train hard, get in shape, love competition, or just want to develop close-knit friendships while getting some exercise, Gracie Barra is the place for you.

Jim is doing a great job at teaching them the basics and getting ready for upcoming tournaments. We feel with him as their coach they will go far in the sport. The boys love learning at Gracie Barra Burton. It is a comfortable family-like environment everybody we have come across has been friendly and willing to help. Professor Burchfield has been very accommodating to us. We homeschool the kids and he has a class that is available on Monday and Wednesdays from 12-1pm that our boys take, and love the instructors there.

Only the 5th class for my and I am loving the experience they are getting. Instructors are kind but firm. They will help to understand movements(why and how to do them) but they will not tolerate slacking off, not paying attention in class. So far, I thoroughly recommend Gracie Barra Burton. Will update review with more time in.